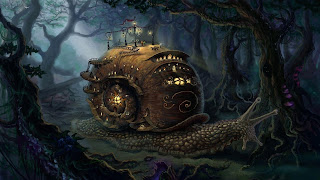 Part 1 was explaining the problem; that is, there is no published giant snails for DCC RPG.

What the hell is that about?

Giant Snails should be a creature in every Monster Manual or Bestiary ever made, but no... no love for giant snails.

Anyway, I'm going to make one for you, right here, right now!

First, I'll take from what I have already.

AC:4, -8 to hit body due to it's speed in retracting into the shell.
Move: 3"
HD: 4-6 (one HD per tentacle) Note: any hit to the body kills the creature.
No. of Attacks: 1 per tentacle
Damage per Attack: 1-8
Intelligence: low
Alignment: Neutral
Size: Large (8 feet high, shell weighs 250 lbs)
Special: Immune to fire (normal and magic) and poison. When target of a spell; 40% spell malfunction, 30% normal function, 20% spell failure, 10% reflected back at caster.

Well, shoot... these are very different! How will I ever work them together??? Oh woe is me!

Just kidding. Someone already thought of that shizz.

Using the DCC Monster Helper PDF from the above awesome site, I'm considering the Flail Snail to be of the Vermin persuasion. So that means...

Initiative: +1
Attack: Smash +3 melee (d8 damage per tentacle)
AC: this is a judgement call, since the Monster Helper does zilch with Armor Class. I figure an 18 due to the shell is appropriate.
HD: 4-6, one per tentacle
Speed: This is tricky. I found this page that has a comparison chart. My math ain't too good, but it seems like a Flail Snail would only move 3 feet per round. Which is really damn slow!
Action Dice: 4-6 d20 (hey, why not?)
Fortitude: +4
Reflex: +1
Will: +1
Special: Same as before. There really isn't any thing to convert.

Alright. So now I have a Flail Snail and a creepy underdark slug, DCC ready, so lets get down to business!

The average wild giant snail is more of a nuisance than a monster. It leaves a slime trail, but nothing special. But now that we have a base, we can do so much more!

The Hauler is used by sentients as a beast of burden to haul cargo to and fro. It is much larger than the wild giant snail but maintains the same speed. A Hauler snail can carry half as much cargo as an ox, but has the advantages of a much smoother ride, much better ability to climb steep inclines, and they are far more docile and easy-going. Haulers leave a pretty wide and thick trail of slippery slime. Walking behind one will force a Reflex save of DC 15 to avoid slipping and falling comedically in snail slime. However, other snails following the slime trail of a Hauler will see their speed increase by 25%. A hauler's slime trail will linger for up to 8 hours in ideal conditions (night time, high humidity), but will last only a half hour in daylight.

The Singing giant snail is a popular household pet. Its shell comes in a wide variety of color combinations and breeders are always coming out with new colorations (that get more and more expensive). It gets its name because the snail sings when it is happy; sort of like how a cat purrs. Singers are the most intelligent of the snails, but that doesn't mean much. They are also the least slimey and the most tolerant to lower humidity and dry places.

Speeders are the fastest snails. They can not carry as much cargo as a Hauler, but are able to carry about 50 lbs of stuff strapped to their shells, and still travel nearly as fast as a human. For this reason they are most often employed by messenger services. Like their cousins, Speeders are docile, but eat far more vegetation than the other snails due to their higher metabolism. Speeders exude a thick slippery slime, similar to haulers, but their trail is much smaller and dries much more quickly (3 hours in ideal conditions, 10 minutes in daylight)

So there ya go. A Flail Snail, A wild snail, a labor snail, a pet snail, and a fast snail. Give me a shout if you use them and how they do in your game.