If you look to your right, you'll see a widget with a podcast in it. Unless you're on mobile in which case you probably see nothing.

Even if you hate it, you should still pass it around and share it to your circle of gaming geeks.

And no, I don't get paid a thing. There is no advertising, no patreons, just two dudes who are barely functioning adults talking about games and world building.
Posted by Everloss at 9:39 PM No comments:

When we aren't playing RPGs, we play Magic the Gathering. Specifically, we play Commander/EDH format.

I like to make decks based on stuff I haven't tried before. This deck is solid Red, a color I rarely use, and based on land destruction, which is vilified and hated by basically everyone. I've used it three times; each time with a different Commander. The first time it did okay, but I wasn't paying attention and used a terrible card as my commander. The second time I was the first one out because everyone was scared. The third time I won by using Obliterate to clear the board then pecking the shit out of the other players with goblins because I could get them out before the other players could play anything.

After each time using this deck, I've modified it based on the play experience. This is the most current iteration.

I don't want the land destruction element to be obvious, and I don't want to destroy my own lands except as a last resort. Cards like Stone Rain or Rain of Salt are too limited in the EDH format so I removed them after the first go around with this deck. This is not meant to be a competitive deck (I just play casual with friends), and we don't pay any attention to ban lists of any sort. Also, I have a very limited budget (I got Wheel of Fortune out of a booster pack when Revised was new).

Name: haven't thought of one yet. 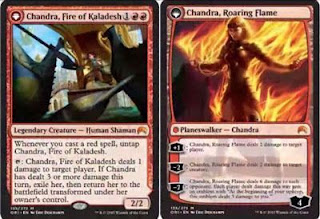 Posted by Everloss at 1:24 PM No comments:


For the second adventure in Hubris, I chose the DCC RPG zero level funnel, Sailors on the Starless Sea.

I chose this one because there were only two level 1 characters left from the last adventure, and I've never gotten to run what many consider to be the "classic" DCC funnel.

Since we're playing in Hubris, though, I had to change some things.

While planning/prepping, I determined that the main bad guys I was going to work with were the Murder Machines, Black Queen, and Floating Island of Terror.

So I changed all of the beastmen from the original adventure into Murder Machines. To do this, I simply upped their AC by 2 and decreased their Hit Points.

I took out the vine-horror monsters entirely.

The final battle on the island within the Starless Sea was changed too. The Murder Machines were taking the kidnapped villagers to the island and throwing them (under the direction of a priest/artificer and his acolytes) into a machine that was powered by magma and magic. This machine converted the villagers into Murder Machines. The idea being that the Black Queen was creating these seeding operations all over the place to cause mayhem.

The high priest/artificer had another trick up his sleeve, though; the Mega Murder Machine! Five victims were transformed into a single gigantic murder machine with a cannon arm.

The two leveled characters were a Cleric of the God of the Terrible Whisper and a regular DCC Wizard.

The rest were zeroes created using the Crawler Companion app.

The players decided to scale the rubble outside the castle rather than go in the front entrance. This led to the first death as the rubble gave way and crushed a zero. They then found the entrance to the cursed tomb of the warlord (being from the area, they knew the story of the warlords of chaos from ancient times. I used it as a red herring) where they slipped and slid and almost died from freezing to death. Eventually they made it back to surface inside the castle. They ignored the stone, the wizard discovered the bonus magical effect of the well.

The burnt church scared them so much they didn't want to check it out at first but eventually figured out the connection between the incense and the ooze monster. They took the incense with them.

After defeating the monsters, they found the bodies of dozens of villagers and even some left alive. Those living villagers joined their ranks as additional zeroes.

They found the skulls in the pool and took some of those with them as they descended down to the starless sea.

Most of them went insane from trying to read the ziggurat, but after being beaten senseless, they summoned the boat and went aboard.

The kraken attacked as they ignored numerous clues I gave them about the incense or sacrificing a victim, etc. Couple more were killed before they did enough damage for the kraken to retreat.

When they made it to the island they were down to the two level ones and three zeroes.

The original adventure has the final battle consist of 20 beastmen, three priests, and a demon. That wasn't going to work here. I dropped the number of baddies to 5 murder machines, a priest, 2 acolytes, and a MEGA Murder Machine.

The PCs managed to get a surprise attack in before the bad guys knew what was going on. After the battle started, things did not go well for the characters. Their zeroes all died almost immediately. Some of the captive villagers got some courage and fought back against the bad guys (two more zeroes for the PCs) but were killed.

Finally, after defeating all of the Murder Machines, the Mega Murder Machine, and the Acolytes, all the player characters were dead except for the Cleric and the Wizard, but the Wizard was unconscious. The Cleric faced off against the evil Priest of the Floating Island of Terror. The priest had already used his black powder pistol and was down to a dagger. The Cleric had a sickle. They both sucked at attack rolls.

Eventually, though, the evil priest hit and killed the Cleric.

My first TPK in 25 years of gaming.

The interesting thing about it was that the players didn't really mind. They thought the adventure was fantastic and want to play it again!

Posted by Everloss at 1:53 PM No comments: